“The executive power shall be vested in a President of the United States of America.”

In the opening line of Article II of the United States Constitution, The President is endowed with the executive power of the nation. During his eight years in office, President Clinton fulfilled his role as Chief Executive through a wide variety of activities. Here, in this module, you can read about some of these activities and the ways in which President Clinton acted as the Chief Executive of the United States.

State of the Union Address

“He shall from time to time give to the Congress information of the state of the union, and recommend to their consideration such measures as he shall judge necessary and expedient” 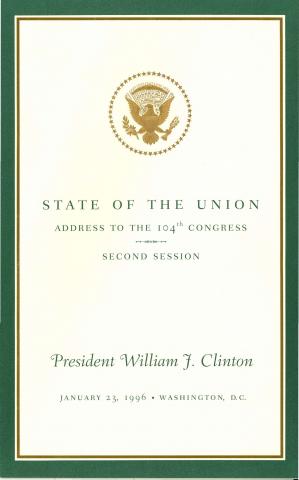 Once a year, the President of the United States convenes both chambers of Congress and delivers a speech that addresses various aspects of the nation including the legislative agenda that the President seeks to pursue over the coming year. During President Clinton’s time in office, he delivered eight such addresses.

On January 23rd, 1996, President Clinton delivered his third State of the Union to a Republican Congress with which he had been locked in a three-week budget standoff just days earlier. Rather than chastising his rivals, President Clinton took the opportunity afforded him by the State of the Union Address to recognize the importance of balancing the budget and thanked the Republican lawmakers for the “energy and determination” that they brought to the table. President Clinton also raised seven challenges for the nation and Congress to find solutions to over the next year.

These challenges ranged on issues as diverse as finding ways to keep our children safe and defending democracy around the world; improving education and reducing crime; bringing economic prosperity to all Americans and protecting the environment; and finally, building a government that works for the American people. Through this speech, President Clinton, like those who held the office before him, reaffirmed that the “State of the Union is strong” and  laid out for the Congress and the American people his policy agenda for the coming year.

“he shall nominate, and by and with the advice and consent of the Senate, shall appoint ambassadors, other public ministers and consuls, judges of the Supreme Court”

When Supreme Court Justices pass away or retire from their post on the Court, the President of the United States is tasked with nominating their replacement. After nomination, the nominee must be confirmed by a simple majority in the Senate.

In 1993, with the retirement of Justice Byron White, President Clinton nominated Ruth Bader Ginsburg to the seat. To nominate Ruth Bader Ginsburg, President Clinton held a small ceremony in the White House Rose Garden and spoke to her suitability to become the next Justice of the Supreme Court, calling her “one of our nation’s finest judges, progressive in outlook, wise in judgement, balanced and fair in her opinions.” Click here for the full text of his speech.

After her nomination, Ruth Bader Ginsburg came before the Senate Judicial Committee who questioned her as to her stance on a variety of constitutional issues such as the death penalty, the constitutional right to privacy, and gender equality. The Senate, satisfied with her responses, approved of President Clinton’s nomination by a margin of 96-3. Ruth Bader Ginsburg took the judicial oath on August 10th, 1993 and served on the Court until her death on September 18th, 2020.

“he may require the opinion, in writing, of the principal officer in each of the executive departments, upon any subject relating to the duties of their respective offices”

In many cases, the matters at hand are directly related to policy and legislation. For example, a cabinet meeting in March of 1993 focused on reforming the student aid system. In the notes sent to Deputy Secretary of Education Madeleine Kunin, we can see how the discussion between President Clinton and his cabinet proceeded.

Other times, the advice given by the executive cabinet can be of grave consequence, as it was when Anthony Lake, the National Security Advisor, penned a memo to President Clinton regarding options for the use of force in reasserting democratic rule in Haiti. In the memo, Anthony Lake details the size of deployment that would be needed, scenarios for the return of the elected President of Haiti, and some threats that American troops would encounter on arrival.

[Return To The Powers of The Presidency Home Page]