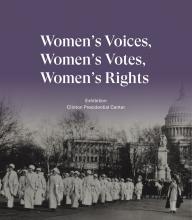 In 2020, the Clinton Presidential Center will commemorate the 100th anniversary of the 19th Amendment and the 25th anniversary of the Fourth World Conference on Women by mounting Women’s Voices, Women’s Votes, Women’s Rights — a vibrant, multimedia exhibit exploring the risks women and their male allies took to win the vote, expand democracy, and elevate human rights.

November 23, 2019 – May 25, 2020
This exhibit will feature an exciting and diverse display – from props and scripts to fashion and tech – that, together, will tell the story of popular culture in the United States at the end of the 20th century. Throughout the exhibit, you’ll have the opportunity to play a variety of interactive games that focus on the era, including 90s trivia, Pogs, a giant crossword puzzle with 90s clues, and a 90s-style video game!

Washed Ashore: Art to Save the Sea

Closed  April 27 – October 27, 2019
This dynamic exhibit featuring 20 giant, breathtaking sea life sculptures. The sculptures are made entirely of marine debris collection from beaches to graphically, yet beautifully, illustrate the toll pollution takes on our oceans and waterways. To learn more visit www.washedashore.org.

Closed: September 8, 2018 – March 24, 2019
This exhibit explored how the Clinton administration worked to improve the environment, the green building design elements incorporated into the Clinton Presidential Center, and ways to make sustainable living a part of your everyday life. The exhibit used videos, augmented reality games, hands-on interactives, photos and text to teach about those themes. You could even walk through a full size tiny house built in the gallery!

Closed: September 17, 2018 – March 31, 2019
The White House Collection of American Crafts was commissioned by First Lady Hillary Clinton and President Bill Clinton in 1993 as part of the “Year of American Craft: A Celebration of the Creative Work of the Hand.” The collection includes 73 works of glass, metal, ceramic, fiber, and wood, created by seventy-seven of America’s foremost artists. This exhibit celebrated the 25th anniversary of theses contemporary American crafts being displayed in the formal public rooms of the White House.

Closed: March 12 – August 5, 2018
Since it burst on the scene, rock and roll has been the soundtrack of American life. It’s been there at every moment – in war and peace, in the struggle for human rights, and in triumph and tragedy. Politically, it marches with us in protest, champions the American Dream, supports campaigns, and amplifies our voices when we demand change. It embraces those who are different and encourages others to do the same. Rock and roll is the voice of “us” – of people around the world who strive to be heard. It reflects our world or a call for it to change. The music speaks for us and with us, and ultimately is louder than words.

The Great Expedition: Exploring the Louisiana Purchase and its Impact on Arkansas

Closed: February 3 – March 4, 2018
This exhibit explored the impact of the most important land deal in American history – one that ultimately created the State of Arkansas.  It featured three original Louisiana Purchase documents alongside art and artifacts from the Arkansas State Archives, Historic Arkansas Museum, The Gousset Family of Natchez, Adams County, Mississippi & Ouachita Baptist University Library Archives and Special Collections, and the Tennessee State Museum.

Mandela: The Journey to Ubuntu

Closed: September 24, 2017 – February 19, 2018
This exhibit allowed visitors to experience locations that played an integral role in South Africa’s path to racial equality and President Mandela’s personal fight for freedom. Visitors were able to step into a recreation of the eight-by-seven-foot prison cell that Nelson Mandela was sentenced to live in for 18 of his 27 years in captivity, which visually demonstrates the harsh reality to which he was confined.

Closed: August 26, 2017 – February 11, 2018
Art of Africa: One Continent, Limitless Vision explored the colors, shapes, and textures of Africa through a diverse collection of art from the continent.

Closed: April 22, 2017 – July 23, 2017
Enveloped in the larger-than-life landscape of Xtreme BUGS, visitors were transported into a vivid, dynamic and awe-inspiring new environment. Surrounded by giant, larger-than-life animatronic insects, this up-close look at the bizarre physical characteristics of bugs and the science behind their mind-boggling behaviors inspired, surprised and educated guests of all ages.

Ladies and Gentlemen:  The Beatles!

Closed: October 8, 2016 – April 2, 2017
On February 7, 1964, four lads from Liverpool, England, stepped onto American soil for the first time as a band. Their performance on “The Ed Sullivan Show” two days later officially launched the years-long frenzy that followed, known as “Beatlemania.” The cultural and musical landscape of America was forever changed by The Beatles. Curated by the GRAMMY Museum, along with Fab Four Exhibits LLC. Ladies and Gentlemen…The Beatles!, explored and celebrated The Beatles’ impact on the American Experience from the fan perspective.

Closed: March 12 – September 11, 2016
Set against the backdrop of the 2016 Olympic Games in Rio de Janeiro, Brazil, this exhibit told the story of American athletes in the modern Olympic Games. Beyond celebrating their achievements and athleticism, the exhibit, like the Olympic Games themselves, honored the human spirit that unites us all: across borders, generations, gender and race.  The exhibit  included photographs, film, and memorabilia featuring dozens of American Olympic athletes.

Closed: November 7, 2015 – February 15, 2016
This exhibit celebrated the art and history of the Coca-Cola bottle on its 100th anniversary. The exhibition featured a chronology of the Coca-Cola Bottle, pop art by by Andy Warhol, American classics by Norman Rockwell, Santa Clauses by Haddon Sundblom, and folk art by Howard Finster.​

Dinosaurs Around the World

Closed: April 25 – October 18, 2015
Dinosaurs Around the World took visitors back in time on a dinosaur adventure and a tour of an Earth very different from today – a time before the continents as we know them existed, when lush landscapes covered Africa and greenery was the norm in Antarctica!​

Spies, Traitors, and Saboteurs: Fear and Freedom in America

Closed: January 18 – April 27, 2014
Created by the International Spy Museum in Washington, DC, Spies, Traitors & Saboteurs: Fear and Freedom in America dramatically illustrated the challenge of securing our nation without compromising the civil liberties upon which it was founded.

Presidential Pets: A Friend In The White House

Closed: May 18 – December 1, 2013
This seminal fashion exhibition celebrated the world-renowned work and inspiring life of designer Oscar de la Renta. The exhibit featured more than thirty of his iconic creations worn by leading arbiters of style, from First Ladies to Hollywood’s brightest stars.

And Freedom For All: The March on Washington for Jobs and Freedom

Closed: August 10 – November 17, 2013
This exhibit paid tribute to the 50th anniversary of The March on Washington. The March took place in Washington, D.C., on August 28, 1963. A highlight of the exhibit included Dr. Martin Luther King Jr’s “I Have a Dream” speech. President Clinton declared the speech to be “the clearest clarion call to the more perfect union of America in the 21 century.”

Closed: June 30 – July 12, 2013
George Washington’s personal copy of the Laws of the United States, First Session 1789, also known as the Acts of Congress, was on display at the Clinton Presidential Library and Museum through a special partnership between the National Archives and the Mount Vernon Ladies’ Association.

George Washington’s personal copy of the Acts of Congress contains his own handwritten notes in the margins. The notes provide insight into his crucial role in the implementation and interpretation of the Constitution and the establishment of the new American government.

Jazz: Through the Eyes of Herman Leonard

Closed: March 2, 2013 – July 21, 2013
Herman Leonard was a popular and influential photographer well into the 2000s, but is best known for his crisp, high-contrast black and white images of famous jazz performers from the 1940s and 1950s.

Leonard caught the eye of jazz fans around the world, and Bill Clinton is no exception. Clinton called Leonard: “The greatest jazz photographer in the history of the genre” and has several Leonard prints hanging in his office in Harlem.

This exhibit featured over 40 large-format black and white prints made and signed by Herman Leonard. To help tell the story of the artists in the images personal objects will accompanied the stunning Leonard images.

Closed: December 12, 2012 – February 24, 2013
This exhibit featured gifts given to President Clinton and the First Lady by world leaders during their time in the White House. These gifts are symbols of the relationships between the United States and other nations. The gifts also highlight the culture of the bestowing country.

Closed: March 3 – September 16, 2012
“Play Ball” featured decades of memorabilia from one of our country’s most storied franchises, the St. Louis Cardinals. Over 100 items, such as the World Series trophy from 2006 and 2011, championship rings, and artifacts were on display.