Bill Clinton was born William Jefferson Blythe III on August 19, 1946, in Hope, Arkansas, three months after his father died in an automobile accident. In high school, he took the name of his step father, Roger Clinton of Hot Springs, Arkansas. 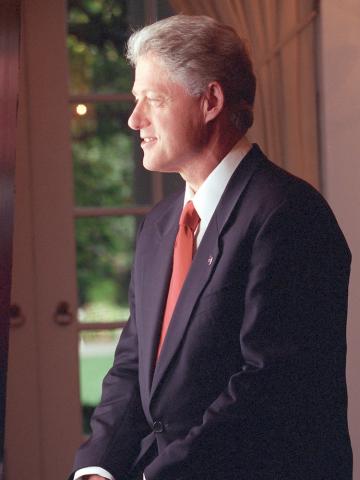 Bill Clinton graduated from Georgetown University in 1968 and was awarded a Rhodes Scholarship to Oxford. He received a law degree from Yale in 1973. After graduation, he returned to Arkansas and taught law at the University of Arkansas before entering politics. His 1974 campaign for Congress ended in defeat, but two years later he was elected Arkansas Attorney General.

In 1975, Bill Clinton married Hillary Rodham, whom he had met while a law student at Yale. Chelsea, their only child, was born in 1980.

Bill Clinton was elected governor of Arkansas in 1978, but lost a bid for reelection in 1980. He regained the governorship two years later and served until 1993. During his 12 years in office, Governor Clinton earned national recognition for his progressive programs, especially his efforts to improve the quality of public education.

After a tough primary campaign, Bill Clinton won his party’s nomination and went on to defeat Republican President George H. W. Bush and independent candidate Ross Perot in the 1992 presidential race. When President Clinton won reelection in 1996, he became the first Democrat since Franklin D. Roosevelt to win a second term.

Following the early failure of his health care reform initiative, President Clinton pursued a moderate but progressive domestic agenda. During his tenure, the welfare system was reformed, the sale of guns was restricted, environmental regulations were strengthened, and a massive federal budget deficit was turned into a surplus.

On the international scene, the Clinton Administration expanded international trade, intervened to end “ethnic cleansing” in Bosnia, launched peace and trade initiatives in Africa and the Middle East, and promoted a framework for peace aimed at ending the strife in Northern Ireland.

In 1998, his relationship with a White House intern resulted in the President’s impeachment by the House of Representatives. A trial in the Senate found the President not guilty of the charges brought against him. President Clinton apologized for his conduct and vowed to keep working as hard as he could for the American people. As a result, Bill Clinton left office with historically high approval ratings for the job he had done as the 42nd President of the United States.

In the years since leaving office, President Clinton has dedicated his time to leading the development of global initiatives through his Foundation. The staff and volunteers of the William J. Clinton Foundation focus on programs of community service, drug acquisition for HIV/AIDS treatment, and fighting childhood obesity in the United States. The Clinton Global Initiative garners the expertise of leaders from around the world in addressing global issues of health care, education, clean energy and environment, job training, and entrepreneurship in under-developed countries.

President Clinton has worked alongside former Presidents George H. W. Bush, and George W. Bush, in disaster relief efforts for the tsunami in South Asia, Hurricane Katrina in the United States, and the earthquake in Haiti.

Hillary Diane Rodham was born on October 26, 1947, the first child of Dorothy and Hugh Rodham. Hillary and her brothers, Hugh and Tony, grew up in Park Ridge, Illinois, a suburb of Chicago.

After graduating from Wellesley College in 1969, Hillary entered Yale Law School where she met Bill Clinton. In 1974, at the height of the Watergate scandal, Hillary worked on the staff assisting the House Judiciary Committee with its investigation of the Nixon administration. She later joined Bill Clinton in Arkansas, where he was about to embark on a remarkable political career.

Bill and Hillary were married in 1975. Hillary served on the faculty of the University of Arkansas Law School before joining the Rose Law Firm in 1976. Bill and Hillary became parents with the birth of their daughter, Chelsea, in 1980. In the meantime, her husband was elected Attorney General and then governor of Arkansas. During her 12 years as First Lady of Arkansas, Hillary Clinton was a strong advocate for the welfare of children and higher educational standards. She sat on the boards of the Arkansas Children's Hospital and the Children's Defense Fund.

When Hillary became the nation’s First Lady, she continued to play an active role. In 1993, she chaired the Task Force on Health Care Reform. Although her involvement in shaping public policies drew criticism, she remained a determined advocate for the rights and welfare of children and women throughout the world. In 1997, she co-created the Vital Voices Democracy Initiative with Secretary of State Madeleine Albright which continues to support women leaders as the Vital Voices Global Partnership.

In 2015, Hillary Clinton announced her second campaign for President of the United States. She ran with Virginia senator and former governor Tim Kaine as her Vice Presidential candidate. At the 2016 Democratic National Convention she became the first woman to accept a major party’s nomination for President. While Hillary won the popular vote of the 2016 election, she failed to win the Electoral College and conceded the race to President Donald J. Trump.

Since the 2016 election, Hillary Clinton has written several books and continues to be active in progressive causes.

Born in Little Rock, Arkansas, on February 27, 1980, Chelsea earned her undergraduate degree at Stanford University, followed by master’s degrees from the University of Oxford and Columbia University, and a Doctor of Philosophy in International Relations from Oxford.  She is married to Marc Mezvinsky, and they have three children: Charlotte; Aidan; and Jasper.

At the age of two, she accompanied her parents during her father’s campaign for re-election as Governor of the state of Arkansas.  Chelsea grew up around the life of politics, whether it was in the Governor’s mansion in Little Rock or the White House in Washington, D.C.  She frequently campaigned with her father during his '96 campaign for re-election, and while her mother ran for Senate she assumed some responsibilities of the First Lady, including traveling abroad and meeting with dignitaries.

Chelsea currently sits on the board as Vice Chair of the Clinton Foundation, teaches at Columbia University’s Mailman School of Public Health, and has written several books for young readers.

Return to Top of Page